Node Vs Django Vs Rails

Node Vs. Django Vs. Rails: The most demanding backend framework in 2021

Whether you’re a startup or SME or a leading enterprise, web applications definitely play a vital role in your business. Though there is a need to craft a feature-rich, robust web app that would cover all your requirements, there is always confusion while choosing the best, high-performing, scalable technology for web development.

This blog gives a brief comparison between these three backend frameworks on multiple factors. Let’s dive into the details.

To begin with, Node.js is an open-source, cross-platform runtime environment and not a framework. The execution of JavaScript by Node.js is outside of a browser. To support this, a Google-designed V8 JavaScript engine is used.

Node.js has its presence in designing web applications that are executed in real-time such as communication tools, online games, IoT devices, real-time notifications, and many more.

When to use Node.js?

Node.js is well-suited for real-time applications. Due to its single-threaded nature, Node.js is used for non-blocking, event-driven servers. Node.js can be used if you are planning for traditional websites and back-end API services. Also, Node.js is well suited for collaborative tools such as trello, or data streaming applications like Netflix.

Django’s popularity for database-heavy apps is due to its existence with Python and Python’s affiliation to Machine Learning.

When to use Django?

Django is well-suited for:

Popular websites that are using Django:

Ruby on Rails focuses to speed up the entire code development process without any process-related hassles. This feature-rich framework forces the developer for component reuse as often as possible through the “Don’t repeat yourself’ rule. This further helps in effectively reducing the hidden dependencies within the code and reduces the possibility of a complexity that would arise when changes are applied.

Ruby on Rails web developers leverage the power of Rails to get maintainable, extensible, and less buggy code and build some fantastic applications.

When to use Rails?

Ruby on Rails is best suited for startups that are looking for an early entry in the market, eCommerce platforms such as Groupon, Shopify, and SaaS products and applications such as GitHub, Zendesk.

As a business owner, picking up the right web framework is vital for building a viable application. A right pick can likely decide the fate of your product but will emphasize more on why your product differentiates from others in the market in unique ways. But you need to get an in-depth idea about the capabilities and limitations of each web framework and how the framework aligns with your business needs and product to help you to bet on the optimal stack for your goals.

Jeevan is a technology enthusiast and strong believer in agile product development. He is a Senior Project Manager at Fortunesoft IT Innovations a leading custom software development company. A Computer Engineer by education and a technology adherent by passion. His interest in computers & the internet has made him a self-proclaimed geek. 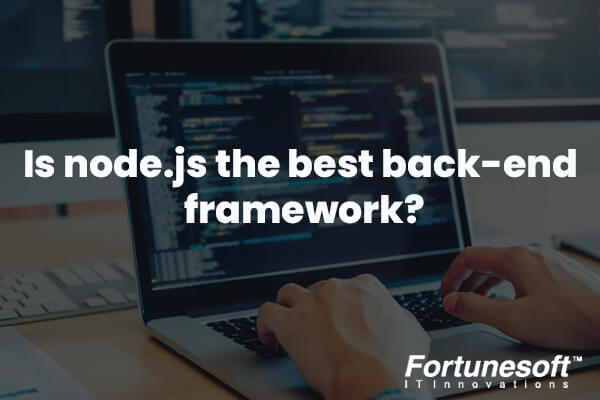 Is Node.js good for back-end development ?