Is Node.js good for back-end development?

Is Node.js good for back-end development ?

Javascript is considered the most universal web-programming language in software development. Previously, it was used as web front-end development tool, but now it has become a major cross-platform mobile development tool as a fundamental technology for platforms such as React Native, NativeScript, PhoneGap and others.

But the areas for implementing javascript does not end here. Afterwards, there was a lot of buzz in using javascript for server-side programming.

But the big question is whether it is good choice for your back-end projects ?

A brief intro to Node.js

Node.js is a open-source application runtime environment which enables you to write server-side applications using Javascript. It’s lightweight, efficient and its capable enough to use javascript on both front-end and back-end which opens new channels for web development.

Javascript is considered the most universal web-programming language in software development. Previously, it was used as web front-end development tool, but now it has become a major cross-platform mobile development tool as a fundamental technology for platforms such as React Native, NativeScript, PhoneGap and others.

How is Node.js is different from web javascript ?

Building apps which are used for running in browser is completely different from building a Node.js application. Both browser and Node.js use javascript as their programming language but the difference is, in Node.js you control the environment. If you are building an open source application which anyone can deploy anywhere, you are aware of which version of Node.js will be used to run the application. In case of browser environment, you don’t have the option to choose which browsers your visitors will use.

Is it a good idea to use Node.js ?

If you’re implementing Node.js as server technology, it is great for your development team as it is the same technology for front-end and back-end. This indicates your team is more efficient and cross functional which leads to less development costs. As javascript is the most popular programming language, the applications code will be easily understood by more developers. It also allows you to reuse and share the code between front-end and back-end of your application which improves the development speed.

On the other hand, Node.js has a vast community where the number of discussions are increasing rapidly, so the knowledge is sufficiently available. You can opt best services from a leading node js development company.

Finally, Node.js offers a package manager, npm where the number of tools in npm’s registry is vast and growing at a faster pace.

We have listed down some points which goes in favour of Node.js and might help you to decide faster whether to choose Node.js or not.

Node.js architecture is used in many collaborative apps such as Trello, live-chatting apps, instant-messaging, online gaming and many others. These applications work within a particular time-frame that the users feel as immediate and current. Node.js specifications are ultimate solution for low-latency needed for these applications to work efficiently.

When node.js is used as common language for both client and server side, where synchronisation occurs fast , which is very helpful for event-based, real time apps. As Node.js runs on Google’s V8 engine, where it compiles the javascript straight into machine code making it faster than ever. Now, a single thread takes care of several client requests with the help of ‘event loop’. Node.js becomes handy, especially when you are processing high volumes of IO-bound requests.

SPAs are applications that fit into a single webpage. Once the site loads, the page does not load thereafter. The goal of such apps is to provide a seamless user experience by lowering the page load time and providing easy navigation to different pages like the desktop apps.

This is why programmers tend to use Node.js along with React for SPAs, because you can control the logic of the app in client and only make calls whenever you need to dynamically change or update the DOM.

As it is a lightweight technology tool, using Node.js for microservices architecture is a good choice.

Accordingly, dividing the application logic into smaller modules, instead of creating a single, large monolithic core, you allow better flexibility and lay the groundwork for further growth. Hence, it is easy to add more microservices on top of previous ones than to combine additional features with basic app functionality.

I/O bound apps are very advantageous the way streams are managed in Node.js. Data streaming is the most powerful implementations of Node.js but there are very few to choose from.

As majority of data that come into systems are in form of streams, so a lot of time can be saved during this process. The goal is to utilize the time during another operation and Node.js just does that.

The functioning of the application depends on the hosting you choose, but with Node.js you don’t face any issues. It is because it can be hosted almost anywhere and everywhere including cloud hosting providers and web servers. Even corporate giants like Google and Amazon have implemented it so well.

If any framework needs time and effort to install, no matter how feature-rich it might be, it removes the whole purpose of facilitating operations at backend. The built-in support of NPM tool which come default with Node.js installation provides much ease for developers.

Node.js is highly expandable, that means you can customize and extend as per your requirements. Developers can make use of JSON to provide the opportunity for exchange of data between the server and the client. It also has facilities such as built-in APIs for developing TCP,HTTP and DNS servers.

If you are looking for real-time web apps, then Node.js might be the best choice for Back-end development as it has all the above features which is very great in delivering excellent performance. It is built on a single-threaded, non-blocking event loop, Google V8 engine and low-level API. Several techniques including cluster module, makes Node.js apps to perform beyond a single CPU core.

After all, its the developer’s job to think carefully about the requirements of project when choosing the right Back-end Platform.

Moreover, what matters is the skills and proficiency of the developers and how they apply to the project. We here at Fortunesoft IT Innovations have several skilled developers who are experienced in Node.js Development projects. If you looking for developers to work on Node.js project, please feel free to Contact us.

Jeevan Babu is a technology enthusiast and strong believer in agile product development. He is a Senior Project Manager at Fortunesoft IT Innovations a leading custom software development company. A Computer Engineer by education and a technology adherent by passion. His interest in computers & the internet has made him a self-proclaimed geek. 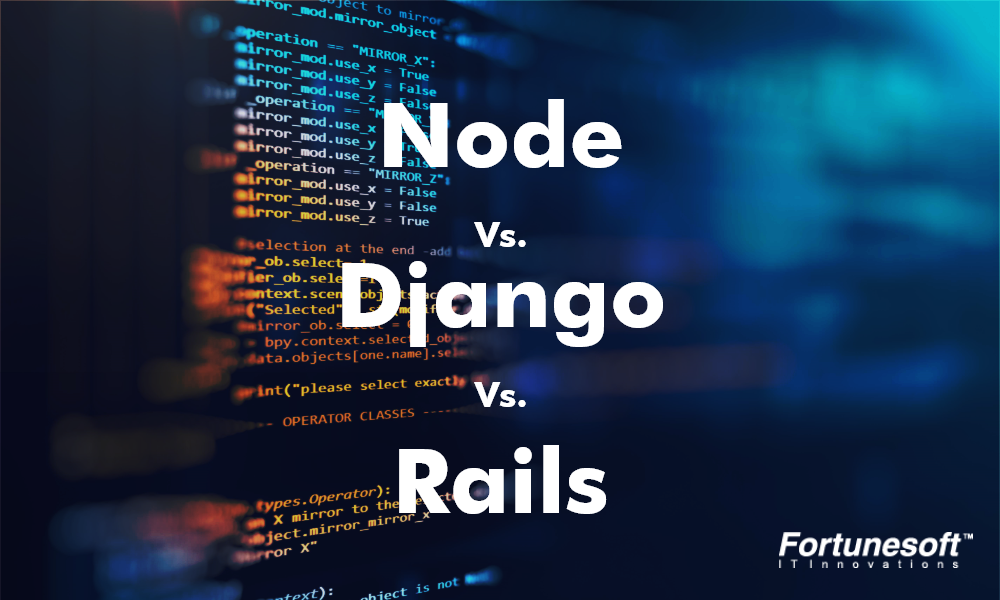 Node Vs. Django Vs. Rails: The most demanding backend framework in 2021